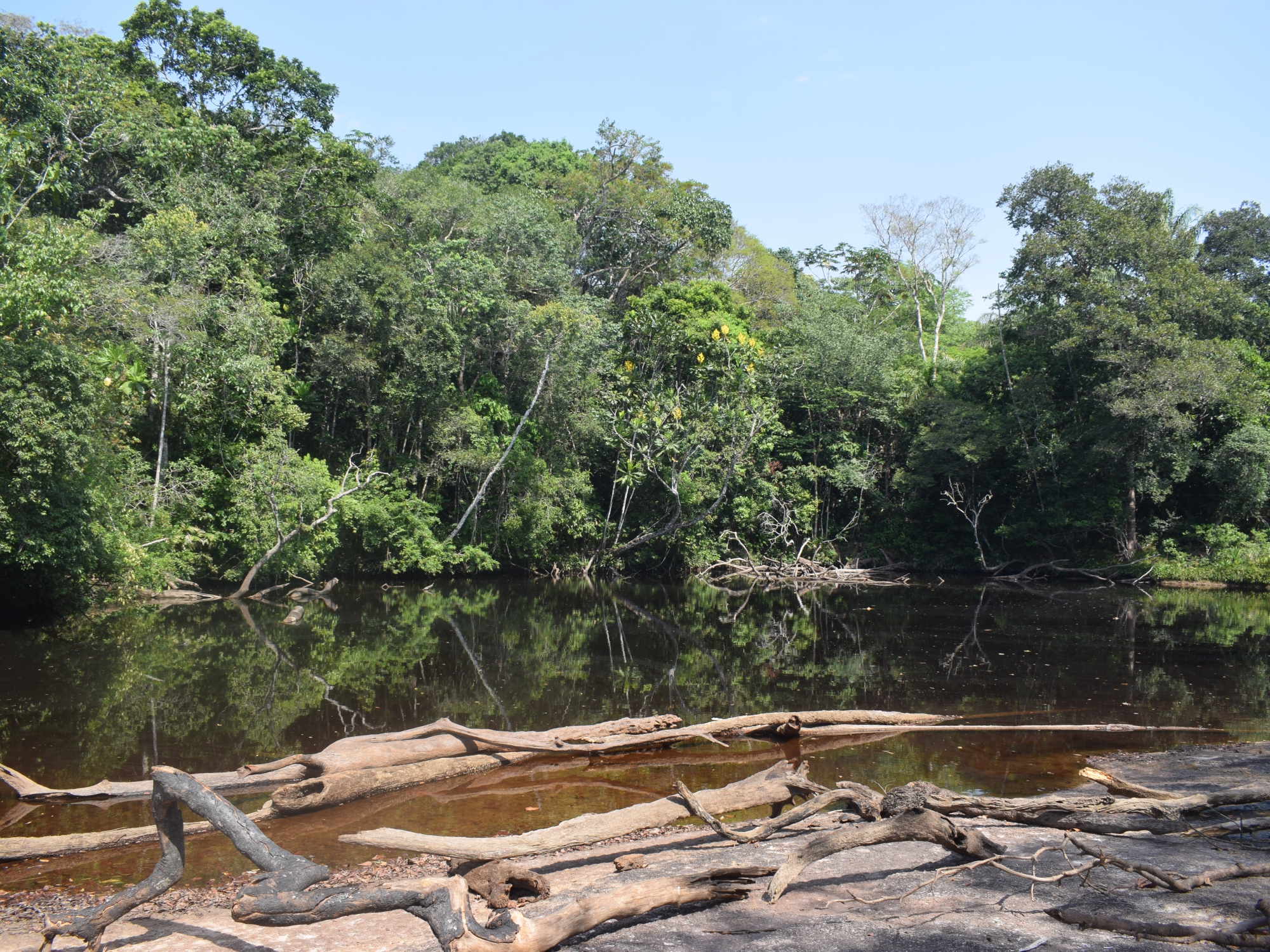 A million thoughts fill your head when you’re immersed in the field. Some become notes; fewer still make it into scientific papers. The rest must find other paths out into the world.

I bristle to what must be at least thirty cats, howling in the way that I have only ever heard dogs mourn the loss of their ancestral freedom. But there is no mistaking this doppler cry for el perro, or even the growl of el tigre [1], from whom this city was wrested long before she reappeared, spray-painted onto the Avenida El Dorado that winds its way to my little room in La Candelaria.

I hope this unsettling sound is no bad omen for my fieldwork studying the Amazonian forest fires. Science, after all, does not credit omens, but claims to extrapolate solely from the empirical and observable. I wonder – could Stephenson foresee Cerrejón, Latin America’s largest coalpit, from the puffs of Colombia’s first steam-operated mines any more effectively than Bogotá’s Indigenous Muisca could from their victory-garlands? [2] Would he have pressed on full-steam ahead? Needs must, I suppose. Needs must… what, exactly?[3]

My feline friends quieten to some unseen signal of the night and I lapse into the uneasy sleep of the researcher whose entire year’s work relies on the success of the next two weeks’ data collection.

I wake up with a jolt as we descend into San José del Guaviare’s 36°C heat. We are Laura, Maria and myself, each of us to varying degrees outsiders here in rural Amazonia. I’m told I couldn’t be more Britanico if I tried, and Laura, though often mistaken as a rola from the capital, actually hails from Pasto near the Ecuadorian border. Maria, a blue-haired bogotana, has combined 2 years of Master’s research here with her unstoppable affability to become something of an honorary local. Her far-reaching network of contacts are consistently helpful, friendly and welcoming.

We are here to carry out and disseminate research about forest fires: how they affect the people and species that share the Amazon’s complex social-ecological system, and how people in turn affect and respond to fire. This involves everything from tracking down bat caves for Laura’s ecological studies to arming local ranchers, rubber tappers and firefighters with felt tip pens as they illustrate their perceptions of the fire system on giant sheets of paper.

Asoprocaucho (Association of Rubber Producers in Guaviare) is one of our key study sites. The organisation’s leafy rubber plantations offer a sustainable alternative to locally prevalent cattle ranching, enabling them to earn a living while preserving valuable tree cover. The rich biodiversity of their finca (estate) can be heard in the rumbling cries of the howler monkeys, and seen in the presence of species like the walking palm (socratea exorrhiza), which has historically provided a valuable building resource to the Nukak Indigenous group.[4]

Using participatory mapping techniques pioneered in Bolivia by the University of British Columbia’s Tahia Devisscher, the project directly involves key stakeholders in modelling regional fire systems. Asoprocaucho is one of 13 local groups participating in the knowledge exchange. Once they have communicated and discussed their perspectives with researchers from the Universidad Nacional de Colombia and the University of Oxford, the institutions share cutting-edge research on forest fires from Dolors Armenteras’ Landscape Ecology laboratory. Local knowledge is thus built into models that can inform new development policies, while rural producers and organisations are kept up-to-speed with the safest protocols for managing their land.

The local representatives’ multiple and sometimes conflicting viewpoints help to build a balanced picture of Guaviare’s social-ecological system. Land management decisions, from ranching and agroforestry to ecotourism, can then be traced back to the economic, sociopolitical and ecological factors that shape them. My job for the next few months involves working with Dr Imma Oliveras and Dr Ariell Ahearn back at Oxford’s Ecosystems Lab to project each group’s visual network into future regional development scenarios, using statistical analyses.

Using the causal connections that stakeholders draw between key factors like land-grabbing or illegal armed groups, the effects of potential policies such as alternative land distributions or the National Development Plan can be modelled. When coupled with quantitative ecological data, like Laura’s research into bat responses to fire and Maria’s land-use studies, these models are an important tool for understanding Amazonia through the eyes of its inhabitants.  If post-conflict economic and environmental legislation is to be successful and sustainable, it will need to be seen as legitimate and workable by the people it affects most directly.

History will likely never reveal the futures Stephenson saw in the steam engine’s glowing coals, or what the Muisca might have prophesied from their hard-won crowns. Nevertheless, by combining academic science with the expert opinions of local stakeholders, we can try to glimpse together into what the future might hold for this region on the edge of the Amazon, and perhaps even change it for the better.

We are grateful to the University of Oxford’s Internal Research England GCRF Support Fund for supporting the project.

[1] El tigre is the most prevalent and enduring name for the jaguar where we have been working in Northwestern Amazonia.

Early Spanish accounts of the Muisca, who formerly inhabitated the Bogotá savannah, describe them using garlands to predict victory for the warriors who won them by racing to mountain shrines (Juan Rodriquez Freile, The Conquest of New Granada, London Folio Society, 1961).

One thought on “Reflections on Research: Fieldwork and Forest Fires in the Colombian Amazon”